Your Brain On Alcohol 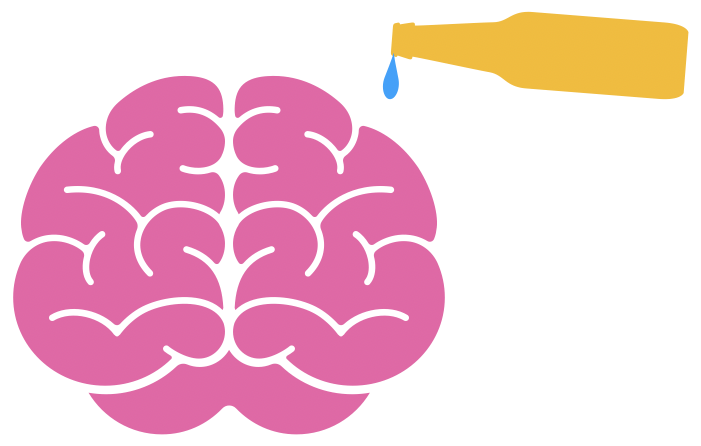 Many people drink alcohol, but do you know what the effects of drinking alcohol are? Most moderate drinkers like alcohol as it can make them feel less stressed, more sociable and even happier. PET scans (a brain imaging technique) have even shown that alcohol releases endorphins, which trigger pain relief pathways in the brain.

Dr. Kenneth J. Mukamal (professor of medicine at Harvard Medical School) and his colleagues studied 3,376 men and women who were enrolled in the Cardiovascular Heart Study. They had MRI scans and also reported their alcohol consumption. The results showed that brain volume shrank in proportion to alcohol consumed. In fact, shrinkage was greater in moderate drinkers compared to teetotallers (non-drinkers).

Another study done in 2008 in the Archives of Neurology supported Dr. Mukamal’s results by revealing that those who drank more than 14 drinks per week over a 20-year time frame had 1.6% smaller brains than teetotallers.

Alcohol consumption causes neurotoxicity, which means that the neurons making up different pathways in the brain begin burning out. In turn, this damage results in brain shrinkage.

However, there have been more than 100 observational studies which have linked moderate drinking to a reduced risk of a heart attack, stroke, and various cardiovascular diseases. Alcohol consumption has even been associated with a lower risk of diabetes and gallstones. On the other hand, for women, moderate drinking can increase the risk of breast cancer. A drink a day can increase one’s lifetime risk of breast cancer to 8.8%.

In a recent Lancet study people who regularly drank 10 or more drinks a week had around 1 to 2 years shorter life expectancies compared to those who had less than 5 drinks a week. However this number increased to around 4 to 5 years for those who had 18 drinks or more per week.

Overtime excessive consumption can lead to anxiety, depression and an increased risk of other cancers as well as breast cancer. Wernicke-Korsakoff syndrome (WKS) is a common brain disorder that can appear due to alcohol abuse. Its symptoms include extreme confusion, amnesia and visual disturbances.

In the journal of Neurology there was a study completed in 2014 stating that men who had more than two and a half drinks a day experienced memory loss and cognitive decline up to six years earlier compared to those who did not drink, quit, or were moderate drinkers.

Alcohol can affect the body very quickly. It is absorbed through the bloodstream in the lining of the intestine and then diffuses all over your body into biological tissues. In just five minutes, alcohol enters the brain with noticeable effects occurring within 10 minutes. The liver starts absorbing the alcohol after 20 minutes. On average, 1 ounce of alcohol per hour can be metabolized by the liver. It takes about five and a half hours for a blood alcohol level of 0.08, the legal limit for drinking, to leave your system.

There are many stages of alcohol consumption. Euphoria is the first stage in which you get a release of dopamine and feel relaxed, but also experience minor impairment of your reasoning. You go through more stages depending on your alcohol level. If you reach a BAC (blood alcohol concentration) of 0.35 you could potentially go into a coma and a BAC of 0.45 may result in death due to alcohol poisoning.